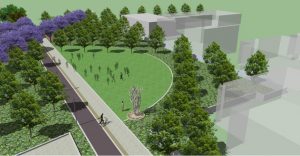 Artist’s impression of the Siyabonga Garden in Israel to honour anti-apartheid activists.

Tel Mond, Israel – 8 November 2022:  A groundbreaking ceremony took place yesterday in Tel Mond, Israel, to launch a memorial garden that for the first time commemorates a remarkable group of South African Jews who contributed to the struggle against apartheid as well as gave support to the State of Israel.

Explains Michael Kransdorff, chairman of the Jewish National Fund in South Africa, who is championing the garden, “At a time when some are trying to divide South Africa and Israel for their own sectarian interests, this garden will be a living testament to the bond between the two peoples in the struggle for freedom.”

The 5,000 m2 memorial garden is surrounded by trees in the Tel Mond park, a 22,000 m2 area located in central Israel. Tel Mond is home to an English-speaking community just 15 minutes from Raanana where many South Africans have settled and 10 minutes from the beaches of Netanya.

A South African artist is to create a sculpture to recognise the Jewish contribution to SA’s struggle for freedom in the park, 36 trees will be planted and there will be stones throughout Gan Siyabonga (We thank you Garden – Gan: garden in Hebrew and Siyabonga: we thank you in Zulu) for each activist with QR codes. When the QR codes are scanned, a short personal history of the activist will be revealed. 36 trees were chosen because according to Jewish tradition, each generation is saved by 36 righteous people.

Kransdorff adds, “There were many South African Jews who contributed to South Africa’s liberation and who were supportive of Israel’s establishment and development. These heroes have never been recognised and many are not well known, yet they were instrumental in helping to build better societies in SA and Israel. We are researching the stories of honourees to be commemorated in Gan Siyabonga, which include artists, rabbis, musicians, lawyers, educators, doctors, parliamentarians, those who went into townships to feed the hungry, and even those who took up arms in South Africa against the apartheid government.”

Rowan Polovin, national chairman of the South African Zionist Federation (SAZF) said, “This memorial garden, a first of its kind, is a powerful testament to a group of South African Jews who fought against injustice in South Africa while also embracing the need for the Jewish State of Israel to exist and thrive. Those we are honouring wanted to right the injustices that they witnessed in South Africa. They were equally inspired by the Jewish people’s struggle to reclaim their ancestral land and their right to attain political freedom. They contributed in various ways to Israel, some fought for the creation of the state, some chose to live there, others helped develop civil society, and even from abroad, many raised funds and offered diplomatic and public support.” 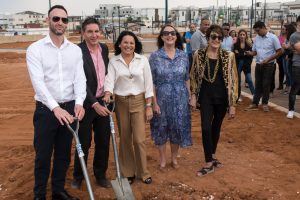 David Benjamin spoke at the event about his father who will be one of the activists honoured in the garden. “My late father, Rabbi Myer (Sonny) Benjamin, was an outspoken critic of the government during the apartheid era and played a major role in the struggle for human rights. He held multiracial prayer meetings at a time when it was illegal. He housed hundreds of displaced people in his synagogue who were expelled from their homes by the Nationalist government. It’s heartening when people who neither sought recognition are acknowledged for their actions.” Rabbi Benjamin was a staunch supporter of the state of Israel and emigrated there in 1988.

Says Ruth Wasserman Lande, a South African member of the Israeli Knesset (parliament), “As someone who grew up in South Africa and immigrated to Israel, I am immensely proud to witness the bridging of those two worlds with the opening of this park – donated by the South African Jewish community which is known for its staunch support of and loyalty to South Africa on the one hand and its love of Israel on the other”.

It also bridges a divide between two countries that unfortunately are experiencing a difficult stage in their relationship. SA has been through tremendous hardship and so have the Jewish people. There are deep connections between us that have been kidnapped. This project is another stone in a bridge to bring South Africa and Israel closer.”

It is anticipated that the statue and special song to commemorate the garden will be unveiled early in 2023.

As the list of those who will be commemorated is still a work in progress, families, friends and comrades are invited to submit names for consideration. Please email [email protected]